The Planning, Use and Development of Parks, Open Space and Green Belts and Approaches to Environmental Management

Canberra was designed by the Griffins’ and was highly influenced by the environment. They aimed to do this by making the environmental qualities dominate the built form. The Griffins both enjoyed designing with nature and this was evident in the Canberra plan. In the design, instead of designating parks and open space they embodied the idea of retaining specific environmental areas with strong character and then designing structures around that. In doing so the space between suburban areas now contain large amounts of open, preserved space. This Idea of working with the environment was very radical thinking for its time. The concept is fantastic however all plans contain problems. Today, Canberra is possibly the lowest density city in the world. Also much of the preserved landscape is only aesthetic, kangaroos on roads are a huge problem and it takes a long time to travel from one place to another. Walkways and bike tracks are promoted in Canberra however many aren’t used due to the large distance between places. In many ways Canberra is the ultimate in environmental design, however, it can also be seen as one of the most unsustainable cities. 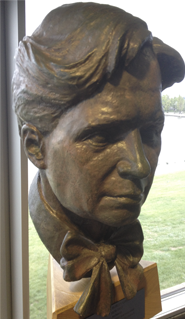 Griffin was born in 1876 in Chicago. In 1899 he completed his bachelor’s degree in architecture at the University of Illinois. Griffin also took courses in horticulture and forestry during his time at University. In 1911 Griffin married Marion Lucy Mahony, who also had a career in architecture. With this strong background in design and vision they were able to combine knowledge and design Canberra in 1912 with a strong environmental status.

The site chosen to develop Canberra on was a windy, dusty, treeless plain. In this barren landscape a population of 20,000 people was planned to serve as the nation’s capital. Currently there are over 350,000 people living in a well planted and open environment. The urban forest that is now present in Canberra is an example of what can be achieved with a strong vision in landscape planning. The huge diversity of plant species used in the urban forest creates a very dynamic environment. This mixture of species allows the management of the urban forest to focus on the forest as a whole and not on an individual tree level. This makes management of the landscape easier than other communities with rare and protected tree species.

Unlike most cities, Canberra is unusual due to the streets, trees and parks being planned out from the beginning. Trees were a vital component to reduce factors such as dust and wind as well as to improve the bleak landscape view. Griffin knew from the start he wanted native species to be grown however he lacked knowledge on Australia plants so Charles Weston, an English horticulturist, was brought in. He had previously worked at the Sydney Botanical Gardens and had an extensive understanding of the Australian Environment. Charles arrived in Canberra in 1913 and was immediately challenged with the environment. The soil was poor in nutrients, growing plants proved an issue with the constantly changing temperature and conditions.

He aimed: (Banks and Brack)

“Weston’s success in greening Canberra was in part due to his considerable confidence in handling large numbers of trees and shrubs in many different situations” (Gray 1999). In 1926 Weston left Canberra after successfully planting out the first suburbs and setting the model the city has been molded from.

Canberra is the only city in Australia to have large populations of free-ranging kangaroos within its urban boundary. This creates a huge problem for motor vehicles involving kangaroos. It has been recorded that there are “more than 1,000 roadside kangaroo attendances per year, and estimate there are twice as many collisions as attendances.” (Link) Each year the rate of motor accidents involving kangaroos has drastically been increasing. “In a 2008 telephone survey of 600 Canberra residents, 17 per cent of the respondents who had ever owned an ACT registered vehicle stated that the vehicle had hit a kangaroo on an ACT road.” To help solve this problem the ACT have enforced a kangaroo management plan. The plan aims to change road features, modify animal behaviour and alter driver behaviour.

Canberra was designed by the Griffins’ to be a garden city and this has been achieved. Collaborating knowledge they managed to create a city which is not only unique in Australia, but also the world. Even though the plan contains problems such as long distances between places and having very low density. Planners have aimed to solve these issues by building strong infrastructure and connection to other places and offering residents different styles of accommodation in different outer suburbs. Today, Canberra should be looked at as a national achievement and as a model that will influence cities of the future.

Banks and Brack (2003) - Canberra's street trees, urban parks and forests before the fire